Bev Johnston is one of North America’s  distinguished percussion soloists.  Her  recordings on the Centrediscs label are inspiring and influential.  That said, her kind words about Points of Departure are truly moving to me.

“POINTS OF DEPARTURE” is a fabulous representation of “the idea of Canada”…a combination of multi-cultural influenced Canadian percussion solos performed exquisitely by American-born musician Nicholas Papador.

The recording opens with Papador’s own composition A Very Welcome and indeed it is! Played with heart and musicality, this is also a great display of Papador’s technical control on the marimba. Beautiful execution of dynamics and flawless riffs add to the impressiveness of the well-maintained structure of the piece. Les petites reprises, by Isabelle Panneton, is also for marimba solo. This piece is somewhat more structurally disjointed but Nicholas manages to “connect the dots” with the clarity and smoothness of his rolls and his control of the dynamics. The third marimba representation on this recording is Hamilton-based composer Christien Ledroit’s epic piece Night Chill –the first representation of the piece being on Catherine Meuniere’s debut Centrediscs recording of the same name. Excellent balance between marimba and audio thanks to the expertise of popular percussion recording producer Ray Dillard and recording engineer Douglas Romanow.

The two vibraphone solo selections are by Nicolas Gilbert (Ariane endormie) and Linda Catlin Smith (Invisible Cities). Gilbert is not a “newbie” to the percussion composition scene, having written several works for marimba, vibraphone and multi-percussion. His latest venture into solo percussion will be a piece for the semi-finals of the Montreal Symphony Orchestra’s Percussion Competition in November, 2015. Linda Smith has added extensively to the percussion repertoire also. Invisible Cities was written for her husband, percussionist Richard Sacks and has been played often by him and many other percussionists. Both pieces are somewhat minimalist in nature and well-paced in the capable hands (mallets!) of Papador!

The single multi-percussion solo represented on this recording, and the longest piece, is called Points d’emergence – “Points of departure”. Thank you Nicholas for sharing your ability to make a combination of diverse percussion instruments sound like one instrument! Perhaps the most structurally erudite piece on the recording, Papador has the skill to enrapture the listener for the whole length of this technically challenging work through his innate understanding of tone production, musical structure and masterful phrasing.

Congrats Nicholas Papador! Can’t wait to hear your next recording! 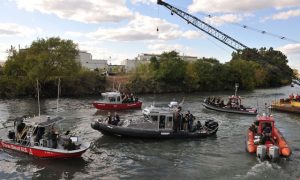 Each of the boats contains a sax quartet and a percussionist (I’m in the left boat).  We’re circling a crime scene.  A car (representing the Egyptian deity Osiris) will be extracted from the River Rouge with that crane.  Yes, we spent quite a few hours floating on the Rouge near Zug Island. 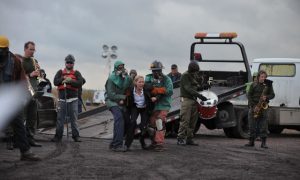 Aimee Mullins (playing Isis) is taken away by Set’s henchmen as the Osiris car is blowtorched into 14 pieces.  The saxophones and percussionists play “the cutting song.”

The film is still having selected worldwide screenings since it’s 2014 premiere.  It is a six-hour film with powerful, disturbing, and beautiful imagery with a deep thread of literary and mythological themes.

Below is Percussive Notes’ review of the Points of Departure CD (thanks for the kind words, Scott Robinson!) :

Canadian Music Centrediscs
American percussionist Nicholas Papador has released Points of Departure, a premier CD recording of an engaging collection of contemporary percussion pieces. Dr. Papador is the principal timpanist of the Windsor Symphony Orchestra and Associate Professor of Percussion at Windsor University in Canada. The fact that he has studied well and comes from a strong musical upbringing is evident throughout the recording in the quality of performance and timbre he achieved. Engineered by Ray Dillard, the recordings date from 2010–12, and the CD includes a booklet of notes in English and French explaining the pieces and composers. Not only does the pristine recording quality add to the listening enjoyment, but also the tracking order of the pieces is effective in engaging the listener. Each has its own sonic percussion world where the variety, timbre, and execution add to the noticeably good experience listening to this recording offers.

Papador’s skilled performances on marimba are evident on his composition “A Very Welcome” with its extended tenth intervals in each hand and “Night Chill” by Christien Ledroit for marimba and electronics. Of the two vibraphone solos, “Ariane endormie” is a particu- larly beautiful programmatic piece by Nicholas Gilbert. The lengthy “Points d’emergence” by composer Francois Rose was a highlight for this reviewer as its use of elemental timbres with three each of metals, drums, and woods at times made the performance sound like a trio of musicians with its effective percussion counterpoint. Points of Departure is a solid artistic effort and notable contribution to contemporary percussion music.

The rest of the publication is available here: